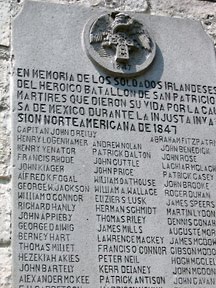 Mexican Memorial to Their Irish Soldiers

* This is a story that might be familiar to those with a strong interest in Irish History - and it is one that is a bit more well known that the kind of stories I usually write about. The long history of Irishmen fighting in the ranks of the US army has been well-documented, and remembered on the Memorial Weekend just past.

But what is not often told is the fascinating story of how religious bigotry led a group of Irish soldiers to renounce their allegiance to the Anglo Saxon Protestant powers of the United States of America, and fight on the side of Latino Catholics. The only group of deserters ever to form an organised unit to fight against the United States. It's the story of the St Patrick's Battalion of The Republic of Mexico. "The banner is of green silk, and on one side is a harp, surmounted by the Mexican coat of arms, with a scroll on which is painted Libertad por la Republica Mexicana!. Under the harp is the motto of Erin go Bragh! On the other side is a painting... made to represent St. Patrick, in his left hand a key and in his right a crook or staff resting upon a serpent. Underneath is painted San Patricio"..... contemporary description of the Banner of The San Patricios.....

* Remember the Alamo!...... The battle fought in 1836 is, to many North Americans at least, a pivotal moment in the history of the United States of America, when proud, free men, sons of liberty, fought for freedom against the tyrannical General De Santa Anna. Viewed from a Mexican perspective, it was the beginning of the end of Mexican Texas, the battles that followed saw the Anglo Saxon northern armies push ever further West, the new, strong north pushing the Latino south out of vast territories that had been in their possession for hundreds of years.
That process would continue over the next decade. In 1846, the latest in a series of confrontations between north and south was about to explode as the USA moved on Mexico's lightly populated western holdings, such as California, New Mexico and Utah. The US was rapidly growing and expanding, millions of new citizens were pouring in from Europe, the race West was on and the Mexicans were in the way.
A series of skirmishes on the interface between the Mexican lands and the Yankee territories soon erupted into all out war.
The US went on the offensive, invading Mexico, capturing the port of Veracruz and in September 1847, seizing Mexico City, forcing Mexico to surrender.
1847 was also "Black '47" - the worst year of the Famine in Ireland. Millions of Irish people would die or flee their country during the Great Hunger. Hundreds of thousands of them poured into North America every year, many ended up in the US army, joining up on the docks of Boston and New York, hoping for pay, food and US citizenship.
The Catholic Irish were on the very bottom rung (if we do not count the even more abject African slaves or the Native Americans facing genocide). They faced bigotry, injustice, ridicule. In the army, they were cannon fodder, led mostly by Protestant "nativist" officers who saw them as little better than scum.
At the start of the war against Mexico, the many thousands of Catholic Irish soldiers serving in the US army (who had virtually no chance of promotion) were even denied the right to hold religious services. Instead, they were forced to attend protestant services. Conditions were incredibly harsh, desertion rates were high.
Mexican generals, hearing tales of the Catholic Irish who were treated little better than pack animals in the US army, realised they could be receptive to enticements to cross over the lines.
In handbills and through agents, often deserters sent back into the US lines, the Mexicans offered land and money for anyone who deserted and joined them.
In the Mexican camps, Irish defectors could be assured of a warm welcome, the opportunity of promotion and the chance of dignity and freedom to practice their religion.
The sound of church bells ringing out in Mexican villages must have been a strong pull for men who had already been forced across the sea by a protestant ascendency.

* St. Patrick's Battalion
Several hundred Irishmen crossed the lines. And they were joined by other Catholics and malcontents, mostly Germans but also Poles, Canadians, Scots French and Italians. There were also escaped African slaves from the southern states.

They were formed into what became an elite artillery battalion, under the leadership of a man called John Patrick O'Riley, who was born in Clifden, Galway and had served in the British army before emigrating to the US and joining the army there as a private.

Some, including O'Riley, are believed to have defected before the official declaration of war.

After fighting as a legion of foreigners at the Battle of Resaca de La Palma, they became St Patrick's Battalion, marching under green flags bearing the emblems of Ireland.

They made a banner for themselves: a bright green standard with an Irish harp, under which was "Erin go Bragh" and the Mexican coat of arms with the words "Libertad por la Republica Mexicana." On the flip side of the banner was an image of St. Patrick and the words "San Patricio."
The St. Patricks first saw action as a unit at the Siege of Monterrey, where they were stationed in the the Citadel, a massive fort blocking the entrance to the city. American General Zachary Taylor wisely avoided a frontal attack on the citadel to capture the city from the flanks.
On February 23, 1847, Mexican General Santa Anna, hoping to wipe out Taylor's Army of Occupation, attacked the entrenched Americans at the Battle of Buena Vista south of Saltillo.

The San Patricios fought hard and well, pouring cannon fire into the American ranks. They were instrumental in capturing some American cannon, but the Mexicans lost the battle.

The San Patricios fought on as Mexico tried to evict the Yanqui invaders, most notably at their final battle at Churubusco. They were divided and sent to defend the approaches to Mexico City. When the Americans attacked a convent the Irish had been sent to fortify, on August 20th, 1847, the San Patricios were said to have "fought like demons".

Mexican officers tried to raise the white flag of surrender three times - and three times the Irishmen ripped it down, only surrendering after they had run out of ammunition.

Most were captured, some escaped and tried to regroup, but there were not enough Irish and Germans to reform a cohesive unit. Less than a month later, Mexico City fell and the resistance was over.

John O'Riley was amongst the 85 San Patricios taken prisoner. Seventy-two of them were tried for desertion (some had defected before war was declared, others had never been in the US army at all and therefore could not be shot for desertion.)

O'Riley, because he had crossed the lines before the declaration of war, was amongst those convicted of lesser offences. These men received lashes and were branded with a D (for deserter) on their faces or hips. Becoming "marked men". Riley was branded twice on the face after the first brand was "accidentally" applied upside-down.
Sixteen were hanged at San Angel on September 10, 1847. Four more were hanged the following day at Mixcoac. Thirty were hanged on September 13 in Mixcoac, within sight of the fortress of Chapultepec, where the Americans and Mexicans still fighting for control of the castle.
Around 9:30 a.m., as the American flag was raised over the fortress, the prisoners were hanged. It would be the last sight they would see. One of the men hung that day, was a Munster man called Francis O'Connor, who had both his legs amputated the day before due to his battle wounds. When the US army surgeon told commanding officer Colonel William Harney, that O'Connor was already close to death, Harney was said to have declared: "Bring the damned son of a bitch out! My order was to hang 30 and by God I'll do it!".
Some of the surviving San Patricios opted to stay on in Mexico after the cessation of hostilities, they settled down and raised families, their descendents are there to this day.
O'Riley was thought, for many years to have died shortly after the last battle, but there is now some evidence that he survived and merely faded into obscurity.
Today, the San Patricios are regarded as heroes in Mexico. They were men who fought for a Catholic country being bullied by the much more powerful Anglo Saxons from the North, they fought for justice and the freedom to practice their religion. To this day, every September 12th, Mexicans and Irish meet at the San Jacinto plaza, in San Angel, Mexico, to honour Los San Patricios. Bands play the anthems of both nations and the students of the nearby 'St. Patrick's Battalion School' place flowers on a memorial, while the audience responds to each of the names read from a list engraved in marble, with the phrase 'He died for the Fatherland!'.
And there is also a Mexican-Irish San Patricio pipe band which regularly performs at the commemorations - which is some pretty crazy cross-cultural stuff when you think about it...

In the US, if they are remembered at all, as traitors.
Conditions for Catholics in the US army did change in the following years and around 175,000 Irish born soldiers fought on both sides of the Civil War, a decade or so after the war in Mexico.
Those San Patricios who had not been hanged were thrown in dark dungeons for the duration of the war, after which they were freed. They re-formed and existed as a unit of the Mexican army for about a year. Many of them remained in Mexico and started families: a handful of Mexicans today can trace their lineage to one of the San Patricios. Those who remained were rewarded by the Mexican government with pensions and the land that had been offered to entice them to defect. Some returned to Ireland. Most, including Riley, vanished into Mexican obscurity.
What can be said for definite is that the San Patricios were the only renegade American soldiers ever to form a unit to fight against the United States. A strange chapter in an otherwise proud history of Irishmen fighting for the United States of America.
* In 1999, a Hollywood movie called "One Man's Hero" was made about the St. Patrick's Battalion. Sadly, I haven't been able to see it. But there are plenty of clips on YouTube.